THE INVENTION OF GRAVITATIONAL FORCE

Sir Isaac Newton  (4 January 1643 – 31 March 1727  25 December 1642 – 20 March 1726])[1]was an English physicist, mathematician, astronomer natural philosopher, alchemit, and theologian who is considered by many scholars and members of the general public to be one of the most influential people in human history. His 1687 publication of the Philosophiæ Naturalis Principia Mathematica (usually called the Principia) is considered to be among the most influential books in the history of science laying the groundwork for most of classical mechanics. In this work, Newton described universal gravitation and the three laws of motion which dominated the scientific view of the physical universe for the next three centuries. Newton showed that the motions of objects on Earth and of celestial bodies are governed by the same set of natural laws by demonstrating the consistency between Kepler’s laws of planetary motion and his theory of gravitation, thus removing the last doubts about heliocentrism and advancing the scientific revolution

Newton built the first practical reflecting telescope and developed a theory of colour based on the observation that a prism decomposes white light into the many colours that form the visible spectrum. He also formulated an empirical law of cooling and studied the speed of sound.

In mathematics, Newton shares the creditwith Gottfried Leibniz for the development of the differential and integral calculus. He also demonstrated the generalised binomial theorem, developed Newton’s method for approximating the roots of a function, and contributed to the study of power series

Newton was also highly religious, though an unorthodox Christian, writing more on Biblical hermeneutics and occult studies than the natural science for which he is remembered today. The 100 by astrophysicist Michael H. Hart ranks Newton as the second most influential person in history (below Muhammad and above Jesus 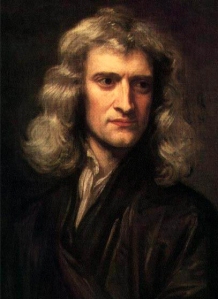 A computer is a programmable machine that receives input, stores and manipulates and provides output in a useful format.

While a computer can, in theory, be made out of almost anything (see misconceptions section), and mechanical examples of computers have existed through much of recorded human history, the first electronic computers were developed in the mid-20th century (1940–1945). Originally, they were the size of a large room, consuming as much power as several hundred modern personal computera  (PCs).1.Modern computers based on circuits are millions to billions of times more capable than the early machines, and occupy a fraction of the space.[2.Simple computers are small enough to fit into mobile devices and can be powered by a small battery. Personal computers in their various forms are icons of theInformation Age and are what most people think of as “computers”. However, the embedded computers found in many devices from MP3 players to fighter aircraft and from toystoindustrial robotsare the most numerous.

Posted in Uncategorized | Leave a comment
Posted on August 10, 2010 by ashmal123

Mohandas Karamchand GanonouncedOctober 1869 – 30 January 1948) was the pre-eminent political and spiritual leader of India during the Indian independence movement. He pioneered satyagraha—resistance to tyranny through mass civil disobedience, a philosophy firmly founded upon ahimsa, or total nonviolence, which helped India to gain independence, and inspired movements for civil rights and freedom across the world. Gandhi is often referred to as Mahatma Gandhi ([məɦaːt̪maː]; Sanskrit: महात्मा mahātmā or “Great Soul”, an honorific first applied to him by Rabindranath Tagore),[1] and in India also as Bapu (Gujarati: બાપુ, bāpu or “Father”). He is officially honoured in India as the Father of the Nation; his birthday, 2 October, is commemorated there as Gandhi Jayanti, a national holiday, and worldwide as the International Day of Non-Violence.

Gandhi first employed civil disobedience while an expatriate lawyer in South Africa, during the resident Indian community’s struggle there for civil rights. After his return to India in 1915, he organised protests by peasants, farmers, and urban labourers concerning excessive land-tax and discrimination. After assuming leadership of the Indian National Congress in 1921, Gandhi led nationwide campaigns to ease poverty, expand women’s rights, build religious and ethnic amity, end untouchability, and increase economic self-reliance. Above all, he aimed to achieve Swaraj or the independence of India from foreign domination. Gandhi famously led his followers in the Non-cooperation movement that protested the British-imposed salt tax with the 400 km (240 mi) Dandi Salt March in 1930. Later, in 1942, he launched the Quit India civil disobedience movement demanding immediate independence for India. Gandhi spent a number of years in jail in both South Africa and India.

As a practitioner of ahimsa, Gandhi swore to speak the truth and advocated that others do the same. He lived modestly in a self-sufficient residential community and wore the traditional Indian dhoti and shawl, woven from yarn that he had spun by hand himself. He ate simple vegetarian food, experimented for a time with a fruitarian diet, and undertook long fasts as a means of both self-purification and social protest.

Welcome to WordPress.com. This is your first post. Edit or delete it and start blogging!